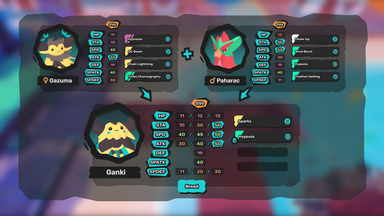 The breeding menu showing the potential offspring of a Ganki and a Paharac. Note: the displayed Techniques are outdated.

Breeding produces Eggs by putting two compatible Temtem together in the Breeding Center. Eggs may inherit various aspects of the parents such as their stats. Using certain items allows the player to manipulate this process.

Male and female Temtem need to share a type to breed.[1] For example, a female Gazuma (

Wind) can be paired with a male Nessla (

Electric), since both Temtem are of different sexes and share the

A fertility value of 7

Breeding is done at the Breeding Center in Superior Omninesia, by talking to the Temtem Breeder NPC. Two Temtem couples can be deposited at a time for 50

each, so long as the player has at least one Temtem in the squad remaining that has not been knocked out. Breeding can be cancelled for each deposited pair without losing fertility or items, as long as an egg has not yet been produced. Once an egg has been produced for each pair, the egg and parental pair have to be retrieved before another breeding session can be started.

Breeding takes 5 minutes if both Temtem are of the same evolutionary line, or 10 minutes if they are not. Hatching eggs in the player's squad takes between 5 and 45 minutes, depending on the species' capture rate. The Incubator device increases the hatching speed by 100% for the firstmost egg in the squad.

Various aspects of the parental Temtem are heritable, some of which depend on the use of items.

Species - The offspring's species will be the same as the first form of the evolutionary line of the female parent. E.g. eggs produced by pairings with female Gazuma will hatch into Ganki.

Fertility - Offspring will inherit the lower value between the parents' fertility values after production of the egg. For example, if one parent had 8 fertility and the other had 6, after producing an egg their fertility will lower to 7 and 5 respectively, and the offspring will be born with 5 fertility as well.

Trait slot - Traits are not inherited without the use of breeding gear. There is a 50% chance for each of both traits the offspring species can have. However, the Engineered DNA Strand will ensure inheritance of the trait slot as viewed in the Tempedia. E.g. a male Nessla with the Hydrologist trait (Nessla's second trait) paired with a female Gazuma will pass on the trait slot to the bred Ganki which gets the Cold-Natured trait (Ganki's second trait).

Techniques - Many species can inherit so-called egg techniques from other species. This is achieved by breeding with parents that have the respective techniques active, i.e. the four techniques that can be used in combat. Other techniques are not inherited and instead are learned by leveling or with use of training courses.

Luma chance - By default the chance of hatching a Luma Temtem is the same as encountering one in the wild, namely 1 in 10,000. For each Luma parent this chance increases x10, leading to odds of 1 in 1,000 for one Luma parent and 1 in 100 for two Luma parents. 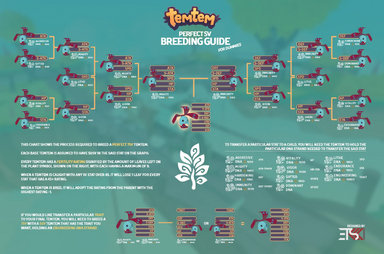 Unofficial perfect breeding guide. Note: there are some inaccuracies on this image, such as the inherited fertility value.

Breeding gear can be used to breed perfect Temtem which have the highest value of 50 for all 7 SVs. For each stat, an associated DNA Strand exists. There are also three DNA Strands associated with two stats each, and one specific to the trait slot. Gender can not be influenced with items and will rely on the gender ratio of the offspring.

Various ways to create perfect Temtem over multiple iterations of breeding exist, depending on the maxed SVs of parent Temtem, their remaining fertility, the desired traits, and compatible DNA Strands. The general idea is to use gear for maxed SVs that are not shared between the two parental Temtem, to ensure the highest number of maxed SVs on the offspring. An example is displayed on the right.