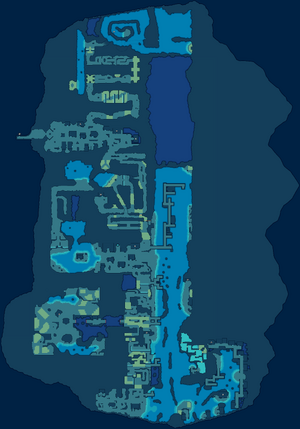 Deniz is a Mediterranean paradise of glittering seas where Water and Wind Temtem abound. Walk the streets of Turquesa, explore the ruins of an ancient fort or just chill.

Wind Temtem are often seen flying around the Thalassian Cliffs of Deniz.

Throughout the Archipelago, Deniz has the reputation of a beautiful island with amazing beaches, historic castles, and majestic waters. Although the exports of the island include natural fragrances created from flowers and oils, salt, and healing herbs, Deniz's economy relies on tourism. Tourists go hiking along the Thalassian Cliffs, swimming on the beaches of Briçal de Mar, visit the ancient Gifted Bridges and Windward Fort, and more. "Send Kalazu" and "By the Sillaro!" are common exclamations in Deniz.

However, the scientific community also enjoys the island. Professor Ermenegilda hunts from a Brime Temtem in Lorenzo's Salt Works. An Oceanographer studies the quasi-oceanic Sillaro including the topography of its submarine ridges and deeps, the ebb and flow of its tides, and the effects of its currents all across the island. Other researchers investigate the Aguamarina Caves for possible signs of the site of Dabmis' Rest. Archaeologists study the Fort and the Bridges, attempting to restore the sites or recover artifacts. The island even has the Archipelago's first natural reserve, Saipark. The park havens migrating Temtem, and pioneers initiative for the management of Temtem populations. It works to preserve biodiversity.

Deniz has gone through many changes in the past few centuries; it did not use to always be like this. Its rich and complicated history gives rise to its touristic culture today.

A few wonders of Denizan architecture reveal the island's history, mainly the Gifted Bridges and Windward Fort. The Fort played an important role in the Denizan Wars and fought against Turquesa to control the island. Today the Fort lies in disrepair. Some archaeologists have tried to restore it, but it is too big and too old. Rumors hint it might be haunted. There are advised no entry without curator permission because of the unstable floors. The other site, the Gifted Bridges, were a gift from the Myrisles Engineering Cooperative. Most of it has collapsed, but one near the Fort remains.

Although the Riverine Fellowship has no archeological structures, it nonetheless has a historical print on the island as well. This port authority ensures sailors are trained and certified and inspects vessels for seaworthiness, overseeing sailing on the Sillaro River. They also take care of their members. Originating in the tale of Dabmis and the Sea Queen, they recommend every member keeps at least one Umishi in their squad for safety and in respect from Denizan traditions. It used to be the most ancient seafaring brotherhood in Deniz, with local chapters in Briçal de Mar and Zadar, but now the Turquesa chapter is the last remaining. It is lead by Giada. Now, the Fellowship also has data protection policies that reach even to the Accademia.

Deniz has a long history of myths and literature. Long ago, the legend of the Kingdom of the Sea Queen was a foundational myth for Arissola in describing its relationship with Sillaro sailors. Also, the Romance of the Last Sheikh is a Denizan poem glorifying the memory of an ancient thalassocrat of the Sillaro, who waged war and lost against mysterious magi beings. Another example is the Fall of the Paninsula, a hyperbolic work by Guizarese, which is considered the masterpiece of classic Denizan opera. It tells the dramatized story of ancient heroes of the Great Island of yore.

In addition to these written legends are oral tales. The three main Denizan oral traditions are The Denizan Wars, Dabmis and the Sea Queen, and the Endairiad.

A long time ago, before the Earth broke, there were two great Denizan citadels. Equal in dignity, one sat on the southern rim, right after Turquesa was built, and Windward Fort overlooked the Thalassian Cliffs in the north. The exact location of the southern citadel is unknown. Because of simply a king's thirst for power, war sunk many good people and Temtem to the bottom of the ocean. Their conflicts went on for so long without any victor that they sought extra-islandic help.

The South utilized its industrious relationship with Cipanku, which loved to travel and trade, to called for Cipanki warriors, in gold and obsidian yoroi. The North took advantage of its marriage ties to an Arburian count, who could not refuse the call to arms and sent in his knights, swords red with blood. However, even these outside forces could not tip the scales and the battles continued, evenly matched. Soon, all the knights and the warriors perished.

For years their wars raged until angered gods chopped off Arbury and Cipanku. Arissola citizens grew tired and rebelled, throwing out their king. Turquesians, inspired by the North, threw out their lords. The wars then ended, simply out of exhaustion.

Under the Sillaro River lived a beautiful Queen, tended by a legion of loyal creatures called Serbatiyo, swift leapers of wave and surf. The majestic beasts are the ancestors of the Oceara lineage. It extended beneath Deniz, filled with seaweed fields, algae orchards, and caverns. Hundreds of sea-sickles tended them, harvesting for the Queen.

One day, a sailor named Dabmis wrecked on a rock in the Sillaro. The waters overtook him, and he almost drown in the current but one of the Sea Queens's Temtem heard his cries. The Umishi brought him to the Lady's court. Dabmis called the heroic creature a sea-angel. There, the sailor fell in love with the Queen, but the man could not leave his world, and she could not leave her realm. They chose to meet at a spot where the water meets the rock and stone embraces foam. There, Dabmis dug, and the Queen brought Umishi builders and Ukama harvesters to build a home--in the sea but of earth, over waters and under hills. They lived there happily for centuries, and their descendants became the Denizans.

This tale about eternal love also stands as a metaphor for the symbolic relationship between the ancient highlanders of Hatless Hill and the early sailors of the Sillaro River. At the time, it was a foundational myth for Arissola. In the last century, it was re-romanticized by sensationalist Arburian writers. However, there are no reliable sources to indicate it is real. The kingdom's location is only ever given in fuzzy, vague hints ("where sea meets rock"). This could theoretically be many places, such as Windward Fort, the Aguamarina Caves, or the grottoes north of Turquesa.

A collection of stories, called Fables of the Isles, reads in regards to Dabmis' tale, "and the priestesses tasked with guarding the gates of Her Nestqueendom are said to have kept "the Serbatiyo's Wrath" from the rest of the world... tucked away in the cavernous formations of Briçal de Mar, high over the petreous gates..."

Oldest of them all, this tale focuses on Endaira, the most cunning rogue of the Meganesia; when all of the islands were one large island surrounded by water. She sailed the whole circular sea, stealing famous treasures. She had no match in the entire Middle Sphere, and her treasures were so numerous, she would have failed to carry them on an entire flotilla of ships. The precious jewels, gold, and silver weighed her down, so she settled on a remote island to unload and bury it all. Bearing her trove, the island came to resemble a mountain. The land became the island of Tucma, and the miners of the Mines of Mictlan work to unearth the jewels Endaira buried there.

The rogue not only stole treasure but also broke hearts. A Shogun of Cipanku fell madly in love with her and offered her his whole land as dowry, but Endaira laughed and rejected him. Instead, tales circulate of her trysts with animal spirits, and some Temtem species trace their pedigree to these unions.

Out of boredom, she sailed to the edge of the world, and then to the high-above. No one has heard from her again. It is even possible she is still alive.