Fire Type Temtem.
It evolves into Mastione after 16 levels.

Magmis appears to have been inspired by sharks. It is primarily orange, with dark purple patterns. Its face is egg-shaped and has a crooked mouth and two large eyes that protrude out to the sides, which are almost entirely red except for the white sclera. From its chest stretching down to the beginning of the legs, it has a dark purple triangle pattern, stretching across its sides and two hourglass-shaped patterns on its back. It has two fins for arms; the flappy part being white. The top of the legs is a darker orange, returning to light for the rest. Its feet are rectangular and have two spherical toes. It also appears to have a dark purple horn or shark fin on the center of its back and top of its head.

Magmis' original habitat was in the lava rivers under the Anak caldera, but now they can be found all around the Archipelago, as foundry operators in Quetzal, heating systems in Arbury... And, of course, in Temtem battles.

Magmis is the first form of a two stage evolutionary line. It needs to level up 16 times before evolving into Mastione. 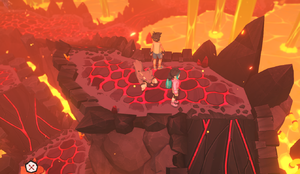 Running around on this raised platform results in magmis encounters almost all of the time.