Toxic Type Temtem.
It evolves into Nidrasil after 22 levels.

Probably a mutation from an ancient serpentine strand of Nature Temtem, Orphyll show remarkable adaptation to noxious conditions. They feature prominently in the art of ancient proto-Arburian cultures, who feared and revered them.

Orphyll is the first form of a two stage evolutionary line. It needs to level up 22 times before evolving into Nidrasil. 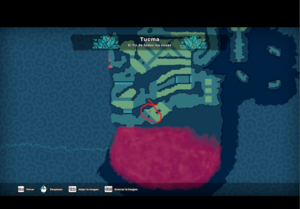