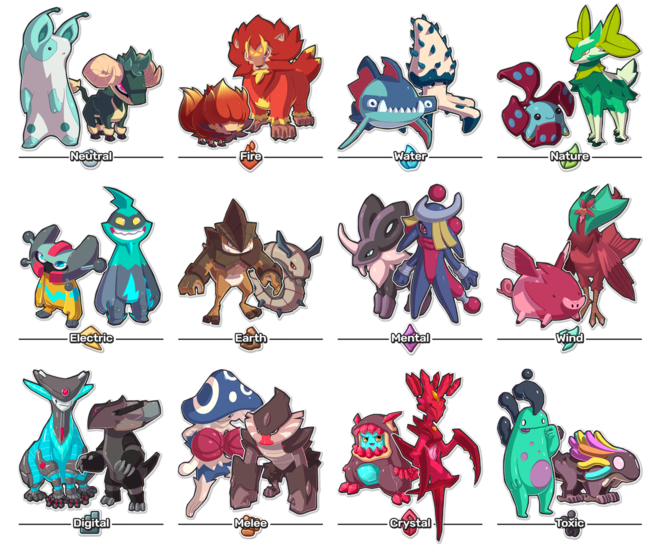 Temtem are fictional monsters and a major element of the Temtem game. Temtem come in a variety of different forms and types. Although most resemble animals, some may resemble plants, mythological creatures or objects. The exact number of Temtem is currently unknown, and will likely not be known until the game releases. As of Alpha 0.6.0, there are 108 Temtem species currently known with 100 of those that players can tame and train.

In the Airborne Archipelago, Temtem are used by people as traveling companions. It is implied that Temtem like to battle and that Temtem battling is considered a sport among people. In addition, collecting Temtem is a popular hobby.

Temtem grow in strength the more they are used in battle. This is represented in the game as Experience and more generally as Level. Levels in Temtem range from 1 to 100 and are indicative of your Temtem's overall strength and experience. When you succeed in battle, the Temtem used in that battle gain experience and, after a certain amount of experience that varies per Temtem Species, their level will increase. With each increase in level, the overall strength of the Temtem will increase through the increase of their Stats.

Temtem have values known as Base Stats that are specific to each species of Temtem. There are seven values, one per stat, per species that interact with Single Values, Level, and Training Values to determine the final value for each stat for each individual Temtem.

All Temtem, upon receiving them in any way, have unique and unchangeable (as of now) values known as Single Values, or SVs. Each individual Temtem has seven SVs, one per stat, and each SV influences their corresponding stat in a positive way, meaning the higher the SV in a stat, the higher the stat. These values range from 1 to 50 and interact with Level, Base Stats, and Training Values to determine the final value for each stat for each individual Temtem.

Upon defeating enemy Temtem in battle, the Temtem you used will receive points called Training Values, or TVs, depending on the Temtem it defeated. TVs are assigned to any one of the seven stats (depending on the Temtem that was defeated) and increasing the TVs in a given stat increases the value of that stat. The total amount of TVs that can be assigned to any individual stat is 500 and the total amount of TVs that can be acquired per Temtem is 1000. TVs interact with Level, Base Stats, and SVs to determine the final value for each stat for each individual Temtem.

Temtem that only have a picture, description or name and do not have enough information to sustain a page about them are indexed here until more details are released.